You're probably wondering why I'm posting this in 2011. Well, I just came to know that Crytek released their SDK.

I came across the name Carl Jones, which triggered a flash-back.. I've met this guy!!! Yes, the guy who gave a press release about Crytek SDK - I've met him and talked to him personally.. Whoo Whooo \m/

It was sometime in Feb 2010, he had come down to India to launch the "India Game Developer Summit 2010". Damn, good old times - I had quit my job to pursue game development when this happened. So much for the  Indie Dreams.. x_x

Anyway, I was so eager that I was almost the 1st to reach there...

(see, Carl still connecting his Laptop and just some people fixing the stage and stuff) 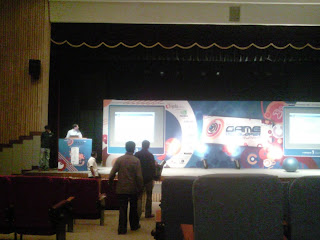 It was actually an awesome presentation... more than what I hoped for 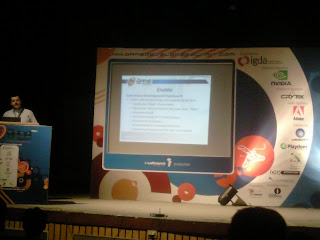 I kinda recalled the essence of what he said (all hail my photographic memory \m/).

What your game should offer -

1. When you develop a game or an engine, list down 10 important features that others are offering (kinda industry standard). Your game should support all these 10 features to compete with them.


2. Of these 10, filter out 3 features that you think are the most important. Your game should should set a new standard for these

He also mentioned how they work at Crytek -

Anything difficult takes 2 days to implement, and anything impossible takes a week.

Ah anyway, after the session and stuff I went and spoke to him - (Whooo whooo again \m/)
I had asked him, "Epic made their Unreal engine available to Indies, what about you guys?" to which he replied they had plans to release the SDK for non-commercial use sometime soon, may be by the end of 2010.

Well, the time has come.. and I knew it an year before.. muhahahaha.. that's the only reason I'm posting this o_O

Wonder if I'll ever get a chance to meet Carmack x_x


Posted by Makubex at 8/20/2011 11:27:00 PM
Email ThisBlogThis!Share to TwitterShare to FacebookShare to Pinterest
Tags: Game Programming, ME